Over 40 courses available Advance Your Knowledge 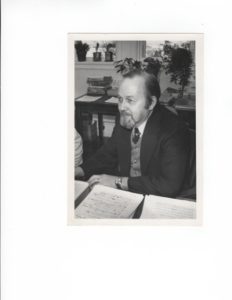 Gerhard Bjarne Lee was born November 27, 1917, the second oldest son of Peter and Agnes (Grevstad) Lee, on the family dairy farm near Deerfield, Wisconsin. He attended Liberty Prairie School, served in the Civilian Conservation Corps in 1937 and graduated from Deerfield High School in 1938. From 1938 to 1942, he managed the family farm and from 1942 to 1946 served as an engineer in the 730th Engineering Company in New Guinea and the Philippines. He received his BS degree in agriculture with a major in soil science in 1948 and an MS in soil science in 1949 at the University of Wisconsin-Madison. After serving as assistant agronomist at South Dakota State from 1949 to 1951, he returned to Madison and received his PhD in soil science in 1955. During this time, he was also an instructor in the Department of Soil Science and worked for both the Wisconsin Geological and Natural History Survey and the Soil Conservation Service of the USDA.   He was appointed assistant professor in the fall of 1956 and promoted to associate professor in 1960 and to professor of soil science and environmental studies in 1974. He helped create and was the first chair of the Land Resources graduate program and he served in that position for 6 years, helping it to grow to more than 75 students.

GB, as he was popularly known, was a superb teacher and interpreter of soil. He skillfully connected hands-on experience in the field with landscape elements and geological landforms. He was a kind, soft-spoken mentor, had great rapport with students who often sought him out through his always open door. In 1955, he began teaching Soil Morphology, and in 1973 initiated a popular class entitled Soils and Land Use Planning that was also expanded into a senior seminar.  He was an undergraduate student advisor for many soil science majors and advised numerous students in the Institute for Environmental Studies. Dr. Lee was major professor to 16 PhD and 34 MS degree candidates. His teaching was recognized with the Atwood Excellence in Teaching Award in 1978 and the Outstanding Advising Award in 1979.

His research in soil genesis, morphology and classification led to numerous publications. He was particularly well known for his work with wetlands and Histosols, the soils of marshes and wet places (see publication entry below as a sample of his writings). He studied soil erosion, use of remote sensing methods to assess the extent of soil losses from croplands, and he conducted some of the earliest work on floodplain delineation. He cooperated with other researchers defining the soil and soil characteristics important to their research, including some early work with organochlorine and organophosphate pesticides.

Dr. Lee retired in 1988 with Emeritus status.  In retirement, Gerhard spent a great deal of time managing and improving his farm near Cambridge.  He planted several acres of trees and restored a wetland.  He became a certified master gardener and volunteered as a docent at Olbrich Gardens in Madison.  As he had throughout his adult life, he maintained a garden and fruit trees at the family home in Madison. In all these endeavors, he was able to put into practice many of the principles he taught in his courses at the University.  He was active in the Koshkonong Prairie Historical Society. He also wrote a memoir about his life growing up on a farm. Gerhard loved the land, especially the area where he grew up.

Professor Lee was married to his wife Mildred for 57 years. Their family included four daughters, Susan (Jim Conant), Rebecca Lee (Jack Theel), Nancy (Fred) Stratman, and Judith Lee. Professor Lee died on February 19, 2006 in Madison, Wisconsin at the age of 88.  The Professor Gerhard B. and Mildred Lee Scholarship Fund has been established through the UW Foundation for student support in the Department of Soil Science at the University of Wisconsin-Madison.

“Wisconsin Wetlands” (1976; UWEX, G2818) Paper-back – 1976 by D.A. Yanggen, C.D. Johnson, G.B. Lee, and L.R. Massie:  How do we resolve the conflicting demands for the use of wetlands? There is no easy answer. We must weigh the value of wetlands against the value they would have if converted to agricultural production, urban development, or other uses. The purpose of this publication is to provide information to help people come to their own decisions on how we should manage Wisconsin’s wetland resources.

This article was posted in Department News.

No comments to show.